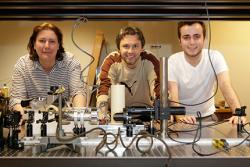 Karine Le Bris is an associate professor of physics at St. Francis Xavier University. Her research centres around the development of new optical detection techniques and characterization of greenhouse gases in the atmosphere. Part of her research involves the identification of the spectral signatures of greenhouse gases and the calculation of their global warming potential (a measure of the amount of heat a particular greenhouse gas traps in the atmosphere). The knowledge of the spectral signatures allows the detection of atmospheric gases using optical ground-based techniques or Earth-orbiting satellites, while the global warming potentials identify which gases should be mitigated in priority.

The spectral signatures of most greenhouse gases are usually found experimentally using a device called a Fourier transform spectrometer, says Dr. Le Bris. However, the instrument does not always allow scientists access to the full spectral range of the gas. Sometimes, the isomeric composition of the gas is also not known. “Using a method called density functional theory, the spectral signature of a molecule – how much light a gas absorbs at a particular wavelength – can be estimated,” she says. “By comparing the theoretical data to the experimental ones, we can simulate the spectrum outside of the experimental range and sometimes have access to the isomeric distribution.”

Dr. Le Bris enjoys spending time in the lab and conducts much of her research there, but she also relies on ACENET. “I’m mostly an experimentalist,” she says. “But I can’t do everything experimentally.” She uses the ACENET advanced computer systems to optimize the geometry of each isomer and find their vibrational frequencies – complex calculations that often take hours to run. “They are not the types of calculations I could do in a timely manner with a regular computer,” she says.

While she admits to being motivated by a love of pure scientific research, Dr. Le Bris says that her work offers other researchers and scientists valuable data that they can use to understand and predict changes in the atmosphere – information that can help scientists, environmentalists and civic planners respond to the effects of climate change. “If we understand climate change in advance it helps us be prepared to deal with it.”