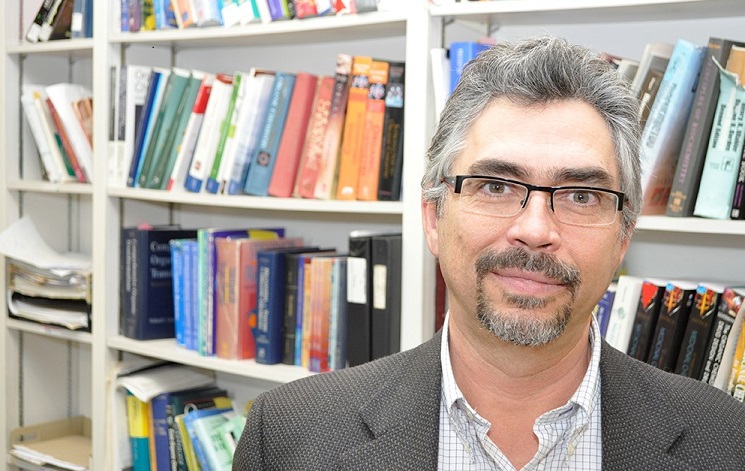 Dr. Ghislain Deslongchamps leads a small group of researchers at the University of New Brunswick, adapting computational chemistry tools normally used in drug design for discovering new catalysts with a wide range of applications – and not just any kind of catalyst.

A catalyst is a small molecule that accelerates a particular chemical reaction. One type of extremely valuable catalyst is one that promotes a chemical reaction to generate a molecule as a single stereoisomer. Stereoisomers are molecules that are identical except that they mirror each other’s structure. The analogy used by Deslongchamps is a pair of gloves. The two gloves are exactly the same except that the left glove is a mirror image of the right; each glove can only fit its respective hand. The same applies to drug molecules and how they interact with the body, so they typically need to be produced in the correct “handedness” in order to be safe and effective. For example, thalidomide was a drug sold in the late 1950’s to treat morning sickness in pregnant women. It was manufactured as a 50:50 mixture of its two stereoisomers; one had the desired medicinal properties whereas the other was later found to cause severe birth defects. Thus, the ability to manufacture drugs as single stereoisomers has become a critically important issue for the modern pharmaceutical industry.

It’s more difficult to make a molecule as a single stereoisomer, however, Deslongchamps is developing computer-based tools and methods for doing just that – developing asymmetric organocatalysts (purely metal-free organic catalysts) that can produce a molecule of “single handedness”. His is the only research group in the world retraining computer-based drug design tools for the purpose of organocatalyst discovery. Because organocatalysts are metal-free, they may produce less toxic and more environmentally sound drugs, important components of green chemistry.

While the catalysts he is designing are of great interest to the pharmaceutical industry, Deslongchamps’s computational tools can also be applied to many other areas where molecules with very specific chemical shapes, features and properties are required.

The tools he’s creating — one called “reverse-docking” and the other called “virtual screening” – are inspired by those used in computer-assisted drug design. The computations carried out in his lab can be extremely time onerous and require very advanced computing resources.

“We are extremely fortunate to be part of ACENET and having access to the Compute Canada resources to do the research that we do,” Deslongchamps says. “A lot of the work we do might otherwise take months of calculating as opposed to days. It’s almost impractical to do this research on a single computer.”

Deslongchamps has a long-standing collaborative relationship with Chemical Computing Group Inc. (CCG), a leading drug software company based in Montreal. CCG is one of only a handful of such companies in the world and Dr. Deslongchamps is utilizing and adapting their software for designing and discovering new catalysts.