Deciphering the Role of the Invisible Marine Life 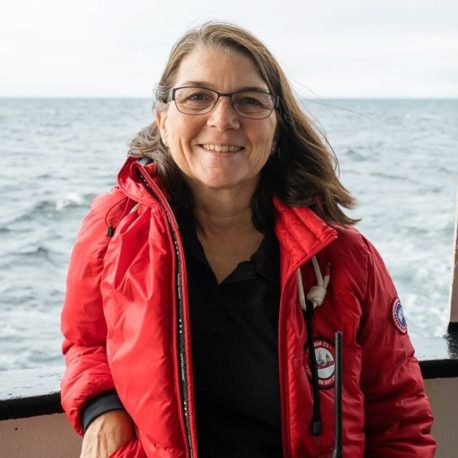 In terms of impact and sheer numbers, microbes dominate our planet. The tiny single-celled organisms invisible to the naked eye live everywhere on Earth – in the atmosphere, the earth’s crust and in our own bodies. The world’s oceans are also teeming with microbes – accounting for more than 90% of the ocean biomass.

For Julie LaRoche, microbes represent an important indicator of the effects of climate change on ocean life. LaRoche is a biology professor and ocean scientist at Dalhousie University and the Canada Research Chair in Marine Microbial Genomics and Biogeochemistry.

“We study how phytoplankton and marine bacteria are affected by increases in temperature and decreases in pH, changes that are both linked to the increase of carbon dioxide in the atmosphere. Marine microbes are key players in marine biogeochemical cycles or, simply put, they are key players in the recycling of nutrients and other elements in the ocean. Changes in the balance of the recycling will affect the productivity of the ocean, including the higher trophic life – fish and other sea creatures.”

Instead of microscopes, LaRoche uses genomics and next generation sequencing techniques to study the diversity and function of ocean microbes. She says the technology has represented a huge leap forward for the science of microbiology. It has led to many discoveries of new taxonomic groups and biochemical pathways in marine microbes since its development a decade ago.

LaRoche and her team have obtained the genomic sequences of microbes they have collected on ocean expeditions around the world and close to home in places such as the Bedford Basin and the Scotian Shelf. The sequences are entered into a huge database where they are analysed in the context of other oceanographic observations. As the observations accumulate over several years, the initial sequence information will serve as reference in the study the long term effects of climate change on life on Earth. “While we are discovering the roles of the microbes that live in the North West Atlantic waters, we are also establishing a baseline for comparing with the observations obtained in future studies, and assess what changes have taken place in the microbial population as a result of climate change.”

Studying microbes means dealing with huge numbers. First, there are approximately 5 x 1030 microbial cells on earth representing an estimated 100 million species. The database that LaRoche and her team are working with is also huge; some 20 million sequences to date with four to five million pieces in each data set. “These are big files that take up a lot of memory. We can’t do it on a normal computer so we have to use ACENET.”

LaRoche and her team have already compiled and analysed three and a half years of data using the ACENET system. The work is enabling scientists to understand the ways the world’s oceans – and life on Earth – are changing. “As the oceans continue to warm and to become more acidic, the microbial life within it may migrate closer to the poles in response,” she says. “This may affect the entire biome of the sea and that is why we need to study it.”