Charting the Mechanics of Human Aging 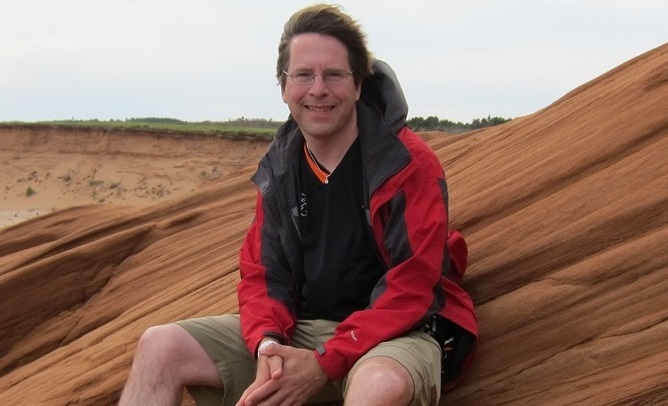 Andrew Rutenberg has always had a keen interest in biology. The Dalhousie University physics professor says that he chose the field of physics because he loves the simple way that the discipline explains the world around us. But he is also applying his physics training to the study of biological systems.

Rutenberg began his exploration of biological systems by building computational models of bacteria – one celled organisms that he describes as “functional nanomachines.” He spent years studying the mechanics of cell division, how bacteria moved proteins from inside to outside, and how parasitic phages kill their bacterial hosts. All are complicated processes that require spatial and time awareness, something that seemed difficult for such simple organisms to accomplish. “A bacterium doesn’t have a brain”, says Rutenberg. “A single cell doesn’t have simple rulers or watches. We developed mathematical models for how those physical processes could work within a bacterial cell.”

Today Rutenberg is concentrating his research on human biology. He’s working with Ken Rockwood and Arnold Mitnitski, professors at the Dalhousie Faculty of Medicine, to develop a computational model of aging. Using the Frailty Index that was developed by Rockwood and Mitnitski, they try to better understand the mechanics of aging over a large statistical population by modelling conditions that affect the health and well-being of an aging population. Rutenberg and his ACENET Research Fellowship student Spencer Farrell have built their computational model using ACENET systems.

Farrell developed the algorithm that allows the model to run. He says computational power is the key to seamless operation of the model – something that the ACENET network is able to provide. “The model uses a lot of CPU time and storage space,” he says. “We typically run 10 million samples for each set of parameters. It takes about an hour and generates about 50 gigabytes of information.” That scale is the key to accuracy, according to Rutenberg.

“Biological systems are noisy, nonlinear and typically far from equilibrium. They’re living systems and they’re complex. While from our background in physics our impulse is to simplify them, you can only simplify so far before you lose all the interesting science. We simply can’t make headway with complex mathematical models with pen and paper; we have to solve them computationally.”