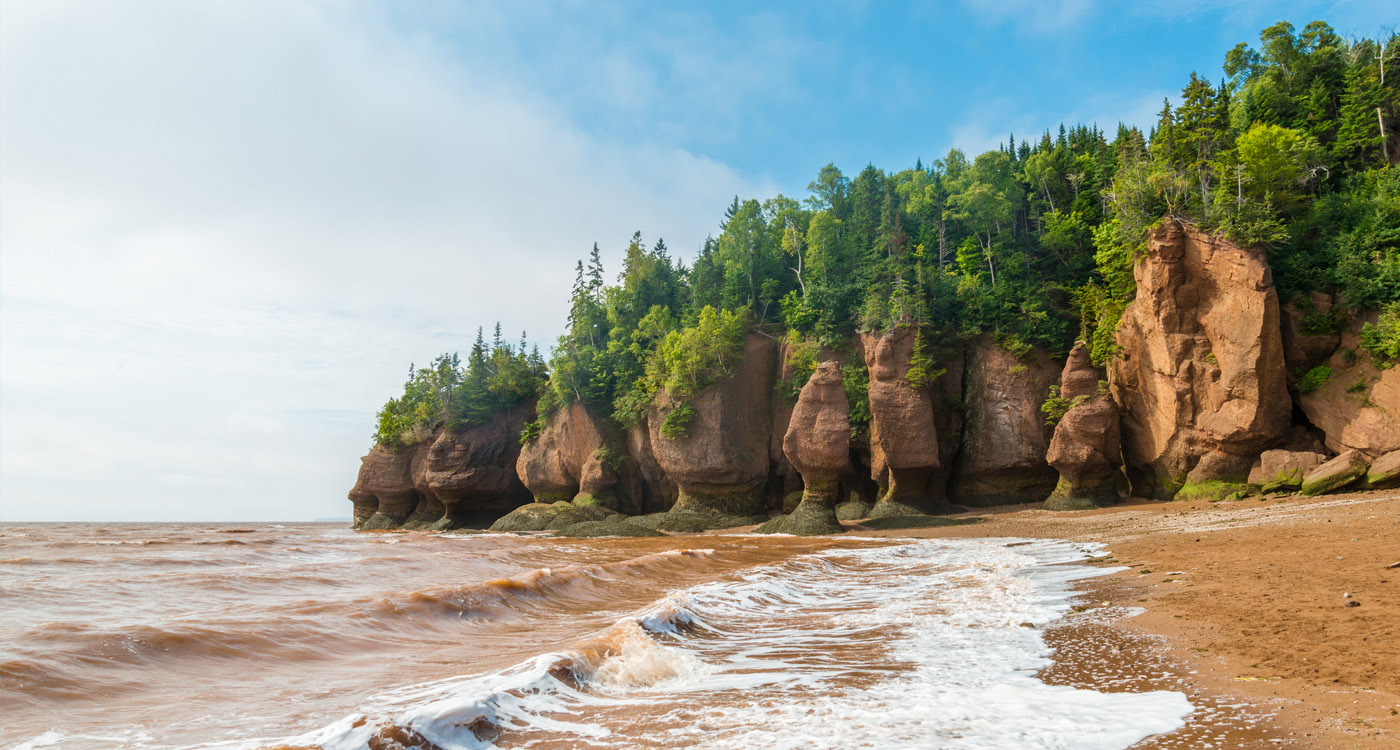 In Richard Karsten’s office at Acadia University the entire Bay of Fundy has been reduced to a grid made up of 100,000 triangles displayed on an oversized computer screen. The data points – tide height, current, water depth – have been carefully plotted by the mathematics professor and his graduate students to create a computer model that can pinpoint the nature of the tide at any spot on the bay, at any given second for the next 25 years. It’s a staggering amount of data.

“At the basic level, what we’re studying is how fast the water is flowing at any given point,” he says. “Then we get into more detail and look at things like the variations in the direction and speed of flow.”

The 270 kilometre-long bay Karsten is studying is one of the most unique places on Earth; a submerged rift valley where the world’s highest tides reach a daily height of 16 meters, moving 160 billion tonnes of seawater in the process and powering a dynamic ecosystem teaming with life. It’s a place often mentioned in the same breath as the Great Barrier Reef and the Amazon; where a dozen species of whales regularly congregate and millions of shore birds gather every year to fatten themselves up for their migration to South America. It could also be North America’s next great source of hydroelectric power.

A number of projects are underway to harness those powerful tides. Most notable is the Fundy Ocean Research Centre for Energy or FORCE, a government and industry supported test centre for in-stream tidal energy located in Parrsboro, Nova Scotia. There are smaller projects as well, including one by Fundy Tidal Inc., a corporation headquartered on Brier Island Nova Scotia. Fundy Tidal is working with partner Clean Current Power Systems Inc. of British Columbia to develop five small community tidal projects to sell energy through Nova Scotia’s Community Feed-In Tariff (COMFIT) program.

Karsten’s research, along with information provided by project partners Dalhousie University, the University of New Brunswick and Dynamic Systems Analysis, will provide information for those projects by locating the spots where engineers can best place underwater turbines, along with long term projections of just how profitable those turbines will be. “Numerical models are relatively cheap as opposed to testing,” he says. It is one reason his research has attracted funding support from Natural Resources Canada, the Offshore Energy and Research Association of Nova Scotia and NSERC.

Charting terabytes of information presents a significant “big data” problem, but Karsten has a valuable tool in his arsenal – a computer network hundreds of times more powerful than the computer on his desk. By tapping into the ACENET system that links large computers located in a number of Atlantic Canadian universities, he has access to a super computer network capable of, in aggregate, computations of up to 68 Teraflops. “What would take years on a desktop takes us a few days or weeks with the ACENET supercomputer,” he says. The speed of the system allows him to run various “what if” scenarios, such as adding more turbines to a particular location or seeing what additional forces would be generated by a storm surge. “It means we are able to answer questions quickly.”

Hydrographers have been maintaining accurate tidal charts for more than a century, but until recently no one was too concerned with information like flow direction and force – information that is vitally important to tidal power engineers. If, for example, the water doesn’t flow back and forth along the same direction with each tide, a turbine might have to be turned constantly to face the flow – a design feature that would increase the cost of the operation significantly.

Karsten’s research provides critical support to the development of a tidal energy industry both in Nova Scotia and nationally. Such an industry would produce substantial amounts of sustainable, renewable electricity that would reduce Nova Scotia production of greenhouse gases and decrease its dependency on foreign fuels. Last year, some of his research activities included making extractable power estimates for all major Nova Scotia tidal resources. In total, the calculations estimated that the tidal resource could support over 1400 MW of installed capacity with only a minor impact on the tides. This is 55% of Nova Scotia generation capacity.

“Tides are ultimately predictable,” says Karsten. “That’s what makes them so appealing as an energy source. But there are a lot of variables – rocks or seaweed on the bottom, deep channels or shoals within a passage – that affect the energy in the tidal currents.”

There is a less pragmatic purpose for Karsten’s research as well. As biologists and oceanographers at Acadia and other universities scramble to unravel the delicate ecosystem of the Bay of Fundy, they are sharing data in an attempt to understand how tides affect the movements of fish and other sea life. “You would think we know a lot about Fundy but we really don’t yet,” he says. “It’s still very much a mysterious place.”